How do we run a campaign at Brookes Union?

It can be tricky to know where to begin when running a campaign. That’s why we’ve tried to make the process as simple as possible for Student Networks. This page sets out how the funding process works, and gives some pointers on how you can run and win campaigns.

Step One: Submit your idea

You can submit campaign ideas online, using this simple google form. Campaign idea submissions are open until October 1st. The more detailed and thought out your campaign idea, the more chance it has of being funded. If you aren’t sure how to develop your idea, drop us an email at su.representation@brookes.ac.uk and we can help you. If you submit an idea which needs more detail, we will reach out to you with the details supplied in the form. After your campaign idea is submitted, it will go to the relevant Network for voting.

Step Two: Get Support for your campaign

Each Student Network has a pot of money with which they decide which campaigns to fund every year. Student Networks can only be attended by students who self-identify into that group (e.g - only LGBT+ Students may attend the LGBT+ Students Network). The more you can get the students in the network to support your idea, the more likely they are to vote to fund your campaign. It’s always a good idea to encourage as many of your peers to attend the network meetings as possible (so long as they identify into the relevant group). The more people you get to attend the meeting, the more likely you are to get your campaign idea voted for!

The Student Networks will all have their first meetings in October this year. You can find the exact dates of each meeting on the Student Networks section of our website. Two things will happen at these meetings. The first is that all students who attend will get the chance to vote on all the campaign ideas which have been submitted over the summer (including yours!). They can choose to use all their funding on one main campaign, or on many smaller campaigns. The second thing they will do is elect a Chair. The Chair will be the main point of contact for the Network, and will also receive campaign training to help them carry out their campaign goal. If your campaign receives funding, you might want to think about nominating yourself as the Chair.

Student Networks are free to elect as many committee positions as they wish. You may therefore want to put yourself forward as a Campaign Organiser, or a Communications Officer. The Networks are autonomous, which means they set their own rules and manage their own budget; Brookes Union does not make any decisions on their behalf. This gives the Networks ultimate freedom to manage their own campaigns and create positive change.

Why would a campaign need Network support?

The campaign fund is specifically ring fenced for students who self-identify into one of our Network groups. This means that students who are from minority or underrepresented groups have the opportunity to have their voices heard. We currently have eight networks up and running:

These campaign groups aim to combat discrimination and oppression not just in the University, but in wider society as well. If a campaign is agreed upon and funded by a network, it means it will have the collective backing of that group of students and is more likely to accurately reflect the views of that group and therefore, more likely to succeed!

So, your campaign has been funded! Now what do you do? The first thing to do, is familiarise yourself with our campaign handbook - this will talk you through all the tips and tricks of running a campaign. (Handbook coming soon!)

The second thing to do, is contact Brookes Union about campaign training. We will contact all Student Networks after the first meetings of the year, and ask who you would like to send to our Campaign Training session. This will be delivered by someone with an expertise on campaigning for liberation groups, and will be useful for helping you think about how to win on your campaign goal.

We are here to offer you support along the way, and answer any questions you may have. You can find our contact details below:

Are you a new student?

Freshers’ week will be packed with opportunities to meet new people. 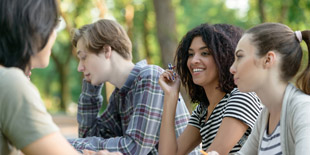 (Your email won't be given to third parties, and we won't use it for any promotions after Freshers' week. You can unsubscribe at any time.)